My  youngest brought home a couple of new books from the school library the other day. One was how to become a writer. The other was how to get published.

How old do you think she should be for the you’ll never make any money, it’s a black hole of rejections, your cats will probably eat you in your garrett, alone, speech?

Labor day has passed, and school is back into full swing. Which means both the kids are out of the house. Which means writing time!

Of course I love spending time with my kids– It’s just this makes the whole putting words onto paper thing much easier.

So, apropos of nothing, a song.

(Also, who the hell knew apropos was spelled like that?)

And I’ve been terrible about keeping up with my updates!

It’s been busy here- a trip to Florida to see family, a trip to Washington DC to see friends, kids in various camps and sports, WisCon, the Nebulas… and now GenCon approaches. It’s been fun but frenetic, and writing time has been shoved in around the cracks, but its happening. Another book done (well, at least a rough), some editing, now it’s time to replenish the short story pile. Then when the kids go back to school, on to the next book, which I’m vaguely poking at in my head right now.

In the meantime, here’s a bit of self-promotion. Streets of Shadows (which contains my story Shooting Aphrodite) is part of the latest Humble Bundle of books. So if you are interested in getting a whole bunch of books at a good price, and giving a bit to charity, check it out fast, it’s going to be done soon.

Kelly referenced Mad Max in her previous post, a movie I finally hauled myself off to the theatre to see.

(At 10 am, because the kids were still in school, and so I didn’t need a babysitter. Going to a movie at 10 am is kind of awesome, because it was cheap and me and my wife were the only ones in there. It does, however, make you feel awful adulty. I remember when most of the movies I saw were midnight shows.)

Anyway, Fury Road was awesome. There’s a lot of good stuff there, which you can find out about easily enough by trolling the fan sites and Twitter. Or you could perhaps go see it. What I wanted to comment on, though, was one tiny portion of the world building that happened in the film. The Warboys would spray their mouths with silver spray paint before doing some particularly suicidal move. Basically, they were making their mouths look like they were chromed, like the front of the cars that are central to the whole Mad Max post-apocalypse. None of them say this though, they just scream about being shiny and chrome as they leap to their dooms.

It’s little touches like these, unexplained but obvious in the context, that really punch up world building.

I LIVE! I DIE! I LIVE AGAIN! READ THE REVIEWS!

I just needed to put this somewhere..

I’ve been spending far too much time gawking at the Hugo train wreck (If you don’t know what I’m talking about, you can try GRRM’s Not a Blog or File770 for a breakdown. Really though, it may be best to just consider yourself lucky and move on.) However, with all the talk of WorldCon, I decided I’d throw up my con going schedule for this year.

FogCon– already done! Lots of fun, as always, and a few days of writing next to the Pacific afterwards.

Mo*Con– A little con in Indianapolis that I’ve been having a lot of fun with. Good discussion, and small enough to meet everyone.

WisCon– First con I ever went to, and haven’t missed one yet. This will be number 8. I can only remember that because our second daughter was only three weeks old at that first one, and we were carrying her around the con with us.

CONvergence– first time going to this one, mostly to visit old friends in Minnesota.

GenCon– Big fun in Indy. Just wish I could get a decent hotel…

I think that about wraps it up. No WorldCon or World Fantasy this year, their both a bit far and I’ve got enough travel piled up already.

Is it really a prequel if the book isn’t out yet?

I’m not sure, but that’s what I’m going to call it, because I like the word. Prequel. It sounds all Hollywood. Anyway, I have a short story called The Gem which is being serialized on Pathfinders homepage. It’s in four installments, and the first one is out now. New chapters will be released on Wednesdays.

The story itself takes place before the events of Firesoul, so don’t worry about spoilers. Go on, check it out– there’s magic, monsters, and a dead goat too! 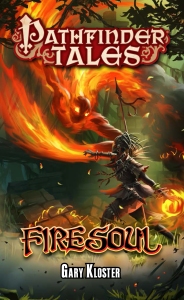 I have to say, that’s a really pretty cover. Art by Bryan Sola.

One of the weird stresses that I’ve found as a writer and a stay-at-home parent is the idea that I must tell awesome bed time stories. It’s one of these weird expectations that float around, partly in the world and partly in my head, a sort of Jungian collective unconscious thing that my kids are regaled with fantastic sagas starring characters that are thinly veiled stand ins for themselves, undergoing adventures that offer trenchant insight to their grade school misadventures.

First off, I’m not that great at making stuff up off the top of my head. Second, the stories I tend to make up in my head? Often not so good for children.

That second reason is why I’ve been having an interesting week. The youngest just lost a tooth, and as she is currently desperate to buy an iPod like her sister, but since she’s not so desperate to work and save for it like her sister did, she decided to write the tooth fairy a letter in which she requested ninety dollars for the tooth.

Of course the tooth fairy had to write back. So I–whoops, she–did. It was a cute little letter, in which the tooth fairy explained that due to the weight of the teeth and currency she had to deal with each night, ninety dollars was just too much. The youngest accepted this explanation, though she’s been having troublesome thoughts about gift cards.

The problem with all of this is that I really struggled with that letter–because I kept having ideas of how to start slipping in some foreshadowing, a troubling phrase here or there that hinted at something much darker, much deeper, a horrifying secret that would slowly be revealed through future correspondence and…

That’s what high school is for.

How I Learned To Stop Worrying and Love the Progress Bar

I think I wrote a post a hell of a lot like this a year ago, but I don’t care.

I love my Scrivener progress bar.

That’s kind of dumb, right? It’s just a little program that keeps track of how much you need to write per day to finish your project by a certain date. It counts your words, and a little bar slowly appears, getting longer with each one, turning from red to green. Just that. Thing is though, when writing novels, it helps me out a ton. It lets me know I’m on track, and that if I just keep plugging away, this thing will eventually be done.

More importantly though, it tells me when I’m done for the day. There’s a goal, I go for it, I reach it, and boom. Done. The rest of the day I’m guilt free. Have a done my writing? Yes. Should I do more? Meh, only if I really feel like it. This takes an amazing amount of stress out of the process for me.

So here I am, thirty-thousand words into the first book of the year (I can be optimistic), and it feels pretty good. The bar is green, and if I keep it green, the stories will be finished.